Experiencing anything new is naturally intimidating. Becoming an adult and moving into your own home, getting into a relationship, and making investments toward starting a family can get overwhelming. Parenting is no different and this is especially true for first-time mothers.

Did you know that this is something that our pets experience as well? They, too, can get first-time parent jitters! Yami had her litter in early October and it was a security camera that captured the heartwarming moment. The footage shows how the new mama-dog consoled all of her crying puppies.

In the beginning, the first-time mom looked anxious and didn’t know what to do. Perhaps learning from experience, she walked away from the whelping box to retrieve her stuffed toys from the living room. What did she do next?

In the same way toys have brought her joy and calm before, Yami thought it might do the same for her newborns. She brought the toys back to the box and gave them to her pups. We’re sure moms out there would relate to the degree of selflessness that Yami displayed!

Adorable Yami with Her Puppies 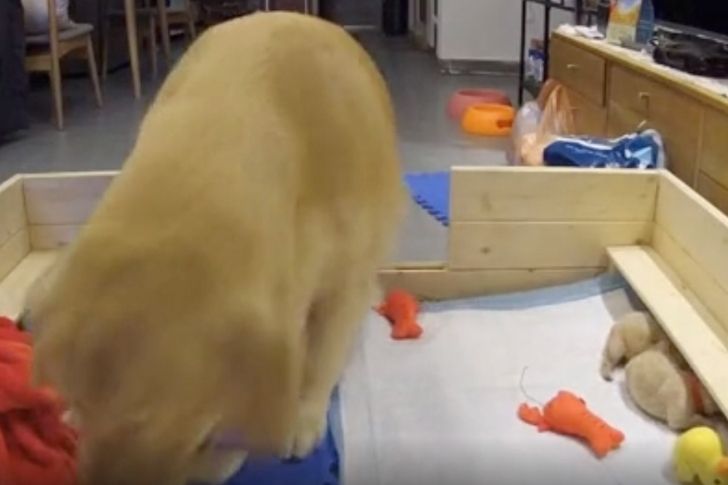 Yami lives with her furparents in Zhengzhou, China. The security camera footage, however, spread across the globe and immediately won people over. While it isn’t new for pets and other animals to display this level of affection for their offspring, Yami’s effort to make sure her pups were comfortable touched many people.

You see, the video also shows her nudging the stuffed toys towards the puppies. It’s as if she’s coaxing them into playing with them. We wonder how she felt when the puppies simply went on crying! It’s not difficult to imagine the confusion new-mom Yami must have felt. The best bit? She did not give up and went to fetch more toys for her babies.

If you’ve ever wondered if all the investments you make toward buying pet toys is worth it, then know that it is. Your cats, dogs, and other pets certainly appreciate these—even when they can’t express it in words.

The Story Behind the Viral Video 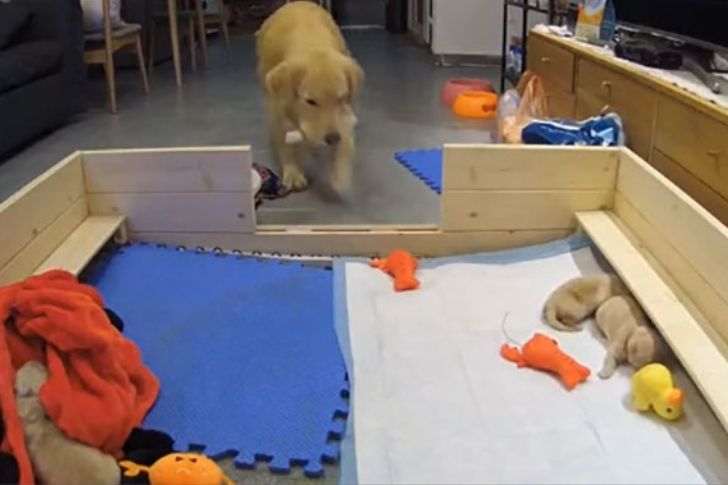 Her owners gave an interview to Daily Mail where they told more of Yami’s story. They said that it took almost three hours before her babies finally settled down. The entire time, Yami was there ready to provide comfort. She sat by them and stroked them with her nose. Sounds adorable, right?

The video was also surprising for the owners because this was the first time they had seen her do it. They weren’t even aware it had happened until they checked on the security footage later in the day! Yami’s gentleness and the intelligence she displayed certainly impressed her furparents, too.

They recalled that Yami would often remain standing while feeding the puppies so she wouldn’t crush them. There were also times where they saw her fetching clothes to keep the puppies warm. Before the video reached an international audience, it had been uploaded on China’s version of TikTok, Douyin, first. There, it received plenty of credit and was viewed thousands of times.

The video has been shared on other social media platforms since then.

What is a Golden Retriever? 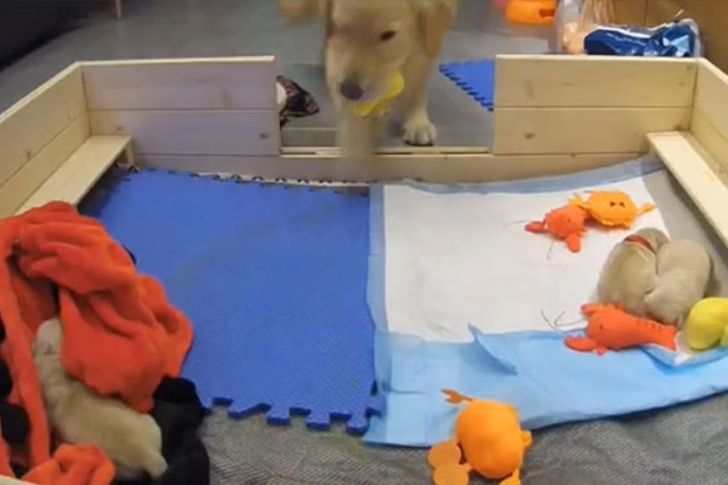 Yami is a golden retriever. Retrievers are usually medium to large gun dogs that were initially bred to retrieve shot ducks and upland game birds during hunting and shooting parties. As their name suggests, they had the ability to fetch the shot game undamaged because of their soft mouth.

They are known to love water and are easy to train using basic or advanced obedience techniques. Retrievers have a long coat with a dense inner coat that provides them warmth when they are outdoors. Meanwhile, their outer coat lies flat against their bodies to repel water to some degree.

If you are interested in adopting one for your own, you’re in luck! This breed is well suited for both suburban and country living. Do remember that their coat often sheds with every change of the season. They also require regular grooming and plenty of TLC from their furparents.