It’s always fun to witness our pet’s first reaction to things. What’s normal to us, isn’t always the case when it comes to our furry friends. Just take the Cat vs. Cucumber videos that went viral a few years back!

Have you ever wondered how your cat might react if you took them to the beach? Cats are not the biggest fans of being in water and the sand will get in their toes, so it would be interesting to see. Will they run away in fear or actually enjoy the whole thing?

This was the case for this adorable ginger cat named Pumpkin. His family took him, along with his brother Moustachio, to the beach for the first time. They knew it would be memorable, but nobody expected Pumpkin’s reaction!

Sure, Pumpkin likes the beach but there’s something about it that the cat despises no matter how exciting the experience is. Well, thanks to this hilarious moment Pumpkin has also become an internet sensation. If you’ve already fallen for this adorable cat, here’s everything you need to know about him.

Things Were Good for Pumpkin at First… 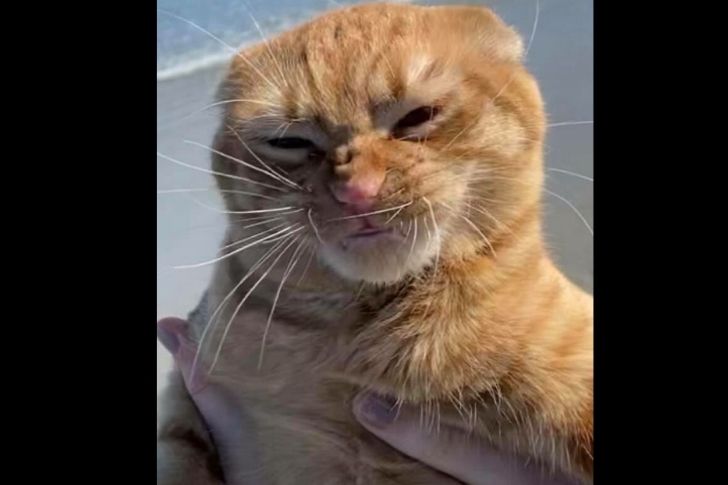 Just like other cats, Pumpkin also likes to roam and enjoy the outdoors. So when they first got to the beach, all they saw was him having so much fun. Pumpkin loves adventures and is curious by nature so the new environment must have excited him.

His family claims that he is charming and intuitive. His temperament is good and he is very friendly towards other animals as well. In case Pumpkin encountered another cat at the beach, his family felt confident that he’ll be okay.

While they were there, the family took plenty of videos and photos of their experience. In the beginning, everything went smoothly and Pumpkin was actually having fun. However, the wind picked up speed to some degree and that’s when things changed. His expression says it all!

From Calm to Disgruntled! 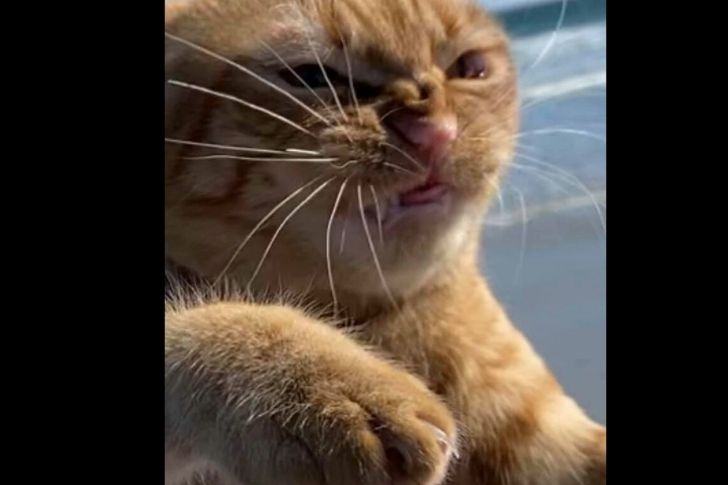 Cats are pretty transparent when they’re unhappy about something. They will really let you know through their expression or by simply swathing you each chance they get. Pumpkin is no exception to this rule.

After the weather changed, so did his mood. He went from happily exploring the beach, to being incredibly disgruntled by the whole thing. Just look at the photos and it’s clear—this is one cat who really wants to go home! We can’t blame his furparents for taking videos and photos first, though. He’s simply too adorable.

It’s a good thing they did, too, because it made Pumpkin one very popular kitty-cat. The family has been back a few more times to the beach since and fortunately, Pumpkin seems more relaxed. We’ll miss his hilarious expressions and the memes, but we’d rather he enjoy his time there instead!

All About Pumpkin’s Story 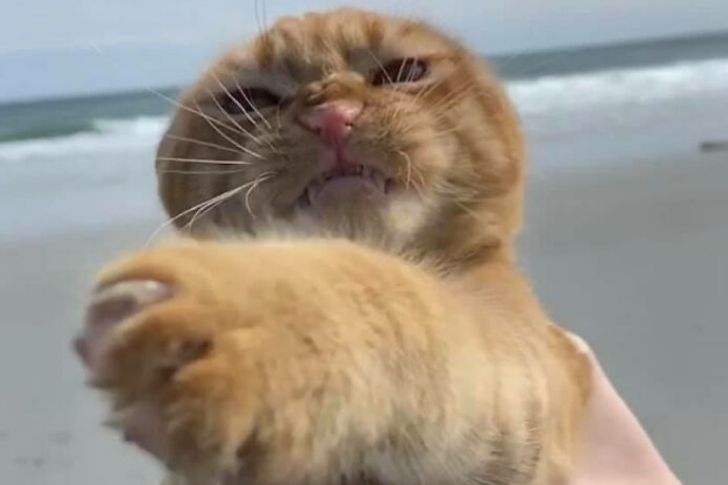 Pumpkin is actually a rescue and was adopted when he was still really small. His family decided to foster 4 kittens from the local animal shelter, including him. They instantly fell in love with all of the kittens, but had to let go and send them to new homes eventually. Well, except for Pumpkin.

This little fella won a special place in their hearts and they adopted him, along with his adorable brother Moustachio. Even back then, the two had always been inseparable. It seemed that everything was going well for both, but they would later discover something about little Pumpkin.

Pumpkin has a mild case of cerebellar hypoplasia. This is a condition that affects the part of the brain which controls motor skills. Pumpkin’s condition affects his coordination and depth perception, which makes him a little bit clumsy. His owners also explained that while his motor skills are affected to some degree, Pumpkin doesn’t let this stop him from enjoying life.

Who would have thought he’d become an online sensation after that experience? His photos have since received over 11,000+ likes and have been used to create funny memes. His family is certainly touched by all the love and attention that Pumpkin has been receiving.

They even made a Facebook page for him, so that his story can be shared with the rest of the world. After all, just like brave little Pumpkin, we shouldn’t let any difficulties prevent us from enjoying our life. It might be scary, but we’ll just have to keep trying!