Cat owners know what it feels like to be under constant surveillance. As you might already know, felines are immensely curious creatures and love to explore anything that is new to them. However, they approach with extreme caution. This is why you would often spot them observing from a distance, whether it be a spot out of your reach or a place that’s obscured from view.

We’ve seen cat owners accommodate this particularly feline trait by adding strange, yet useful modifications to their homes. Remember ceiling cat? That was the famous meme of a cat with its head poking through a hole in the ceiling and observing from above. This time, however, we’ve upgraded from holes to an entirely glass ceiling.

The credit goes to one enterprising and very creative shop owner in Taiwan. This wouldn’t have gone viral had it not been for their friend who shared photos of the shop online.  Taiwanese Twitter user @SMcrocodile shared photos of the renovated shop, which included the glass ceilings so the cats could people-watch all day. 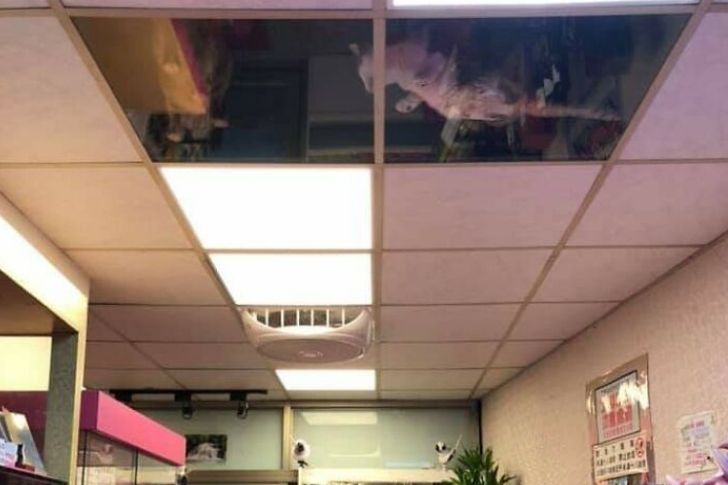 The shop had an attic-like space available, which was big enough for the cats to stay in during store hours. Fortunately, installing the glass ceiling did not require roof repair to install. It might seem like a strange modification, but it did serve a good purpose.

How did they do it? Well, instead of using the usual ceiling tile, they opted to use glass panels in certain spots instead. Of course, it needed to be sturdy as it still needs to function as a regular ceiling. Once the glass was installed, however, it was clear who benefited most from the modification. 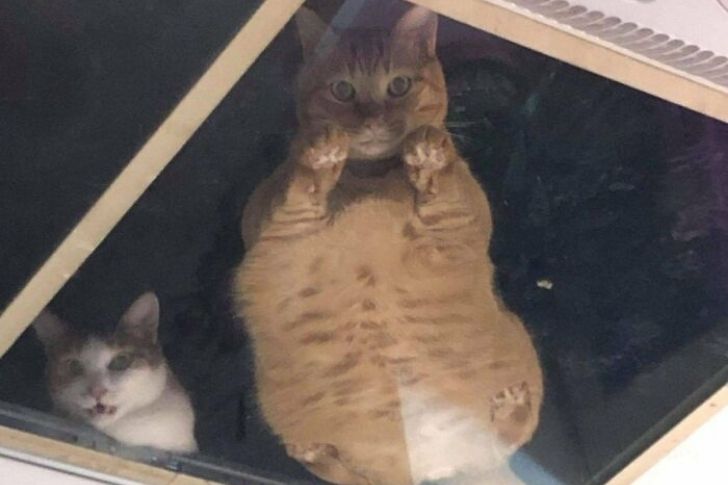 Who needs security when you’ve got a purrveillance team? Kidding aside, anyone who might find themselves in the store for the first time will be surprised to a degree. If you’ve ever imagined what it must feel like for fishes inside an aquarium, well, this is as close as you might get.

Just imagine seeing an adorable, fluffy cat face looking down on you from above. It might get so distracting, you’ll end up sticking around the shop just to observe them, too. According to the owner, however, they’re only peaceful when fed on time. They can create havoc otherwise!

The Legend of Ceiling Cat – Revived 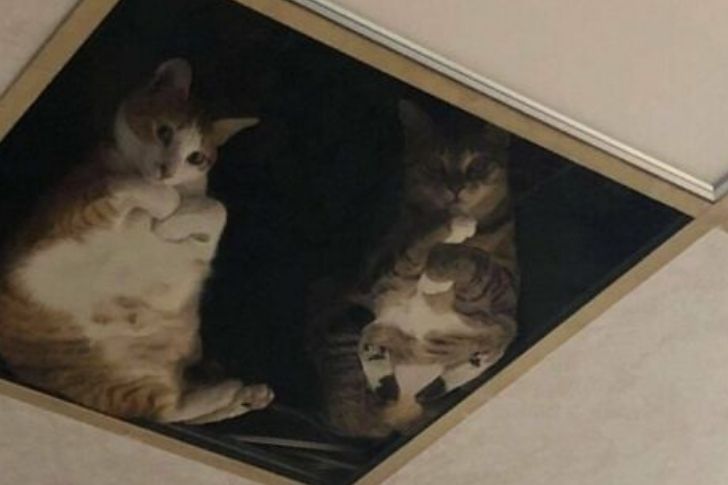 When the post went viral, many remembered the ceiling cat, which became viral during the early days of the modern internet. You can give credit to that photo for inspiring the memes we see today. Ceiling cat is as simple as it sounds: a cat with its head poking through a hole in the ceiling. It’s only the accompanying text that changes and gets funnier over time.

A lot of users called these new ceiling cats the version 2.0 or 3.0 of the original. Many have jokingly claimed that the ceiling cat has been revived! Others also playfully pointed out that these cats are the true definition of CCTV – Cat Ceiling Top View.

As for cat lovers? They were quick to point out these cats have found their rightful spot, looking down on humans like the overlords that they are. The Twitter post has since gone viral with over 100k likes and more than 60k retweets. Just like ceiling cat, these images were used in many memes too.

Do cats make good shop guards? Some would say that the degree of their ability must be high since cats are natural hunters. Well, that is until they get distracted by sleep and cat food!

What we’re sure of is the level of entertainment they provide both their owners and anyone who steps into the shop. It would be hard to feel lonely with these cats around. They just have to look up and be reminded that there’s always “someone” quietly watching over them.